Fred Chong, Founder, and Group CEO
What does it mean to be a next-generation media company?

A digital marketing agency, a social networking organization, a content aggregator that uses several YouTube video channels, or a firm that does all this and more?

The last decade has witnessed several YouTube multi-channel networks (MCN) evolve, from service enterprises to massive, influential media corporations. In the wake of YouTubers’ increased social reach, MCNs have rapidly adapted to help digital content creators churn out higher quality videos and better manage their revenue streams. A handful of businesses have emerged to help Asian content creators grow popular in and around the region, but Malaysia-based WebTVAsia is one particular company that currently dominates the MCN marketplace. The company, a diversified digital media group that empowers the content creator economy of Asia, is the continent’s first YouTube-certified MCN that generates over a billion monthly views across all its channels.

“WebTVAsia is a diversified digital media company and Asia’s number one YouTube multi-channel network. We have signed over 3000 of Asia’s leading YouTubers, focusing on generating value for our artists and creators,” remarks Fred Chong, founder and group CEO of WebTVAsia.

WebTVAsia has managed some of the most prominent YouTubers, including famous names such as Namewee and Karen Kong.
Its team has a keen eye for true talent and works with content creators with great potential. Traditional media firms do not often recognize the charisma of these artists; WebTVAsia, on the other hand, steps in and nurtures them to get “identified” and develop their channel for more international audiences.

WebTVAsia currently maintains a strong presence in Malaysia, Thailand, China, Taiwan, Singapore, Indonesia, Japan, and Vietnam markets. Its core business is driven by content production, offering full-range video, film, music, and live and animation production capabilities to global studios and platforms. The company’s award-winning team has over 20 years of expertise in the media entertainment industry and continues to generate exciting content from music to feature films, collaborating with regional partners.

Bringing to light WebTVAsia’s broad prowess in upgrading influencers to tier one and two artists, Chong cites the success story of its first creator, who was also an influencer on Facebook and YouTube. The company contributed its content creation expertise and assisted the budding new talent in producing his debut feature film. In another scenario, Alipay, a third-party mobile and online payment provider, intends to expand its presence in Southeast Asia.

WebTVAsia collaborated with them on a 360-degree influencer marketing campaign. The firm was involved in many content creation processes, from micro to macro influences, providing solutions that allowed them to discover the right demographic for various social media platforms. WebTVAsia was able to put together an extensive campaign for them, including a collaboration with a tier-one Korean celebrity. Determined to craft many similar success stories in the coming years, WebTVAsia expects to create immense value for its creators and brand partners by bringing the best of Asian talent together under one ecosystem.

WebTVAsia is leveling the playing field for Asian content to strive and grow, building new monetization models for its creators and influencers. Whether web 1.0, 2.0, or 3.0, WebTVAsia will focus on empowering and safeguarding the creator economy. With its multi-lingual team across the region, the firm will continue to help its partners in localization and achieve better results. 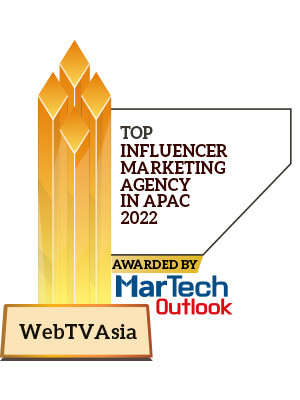 Description
WebTVAsia envisions a future in which Asia’s creators, brands, and audience are seamlessly bridged via a healthy collaborative ecosystem. With over 20 years of experience in producing, marketing, innovating, or networking, it brings a wealth of know-how to support the growth of digital entertainment in Asia.